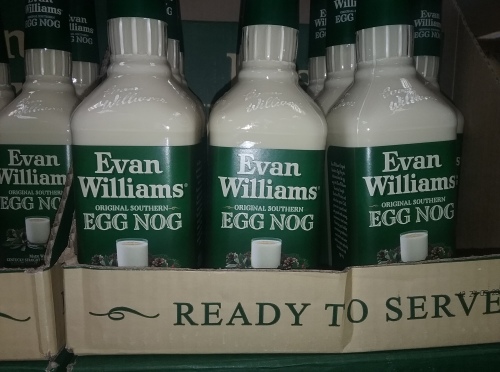 The stockings are hung, and my presents are wrapped.  Because when a random dude in red infiltrates your chimney, one has to be ready.  I’ve tied myself up and am awaiting the arrival of this man, the Man in Red.  But who is he? A total enigma, duh, according to limited folklore.. So here I lay, submissive and content, reflecting upon Santas from contemporary cinematography that I’d like to fuck. (Aka, SILFs).

Ironically, my favorite Christmas film doesn’t contain a single Santa. It’s A Wonderful Life (1946) is my favorite Christmas film, probably because it was first a short story and contains philosophical themes as well as social commentary. These themes include: Post War financial depression, suicidal thoughts, pharmaceutical culpability, existential crisis, marital abuse, and dare I say, feminism. Even though I loved It’s A Wonderful Life from a young age, I didn’t fully appreciate certain aspects until now.  Upon reflection, I know it’s because of what happens once George Bailey is “dead.”  When “Violet Buck” (Gloria Grahame) comes back into George Bailey’s life post mortem, she showcases an early example of the hooker-with the-heart-of-gold archetype, plus a case of shoulda coulda woulda as far as girls that got away in George’s life are concerned. 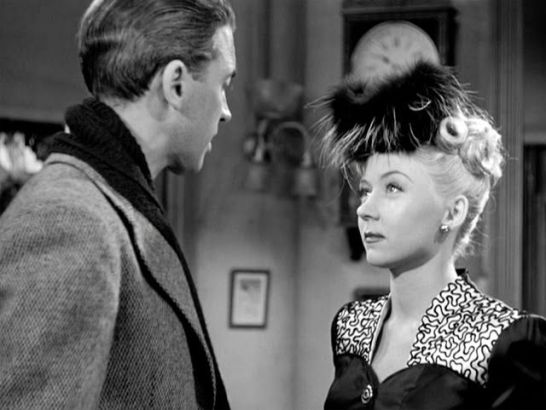 Forties-era rhinestone-ed necklines aside, scenes in Christmas films captivate for subjective reasons. Holiday films appeal to our most childlike instincts and associations.  In a Christmas-themed Golden Girls episode, the ladies wait in a psychologist’s office for Rose, who is a receptionist there at the time. A “Santa” enters the waiting room, and Blanche’s horniness suddenly goes into overdrive.  Apparently, she has a Santa fetish.

While I do not have a Santa fetish, given all of the representations of this enigmatic character in film, turns out there are a few who could potentially be a turn-on.

I figured Thornton wrote these scripts, but turns out they were penned by a bunch of random people.   Thornton taps into his “outsider” and “low life” persona well, fleshing out this character of “Willie” so well that I assumed he was a product of Thornton’s own imagination. Willie is a drunken pervert without a conscience, except for moments when, it turns out, he does seem to have a conscience. Is this guy boyfriend material? In my world yes, because I refuse to accept reality and always pine after those who consistently show me they are bad news. 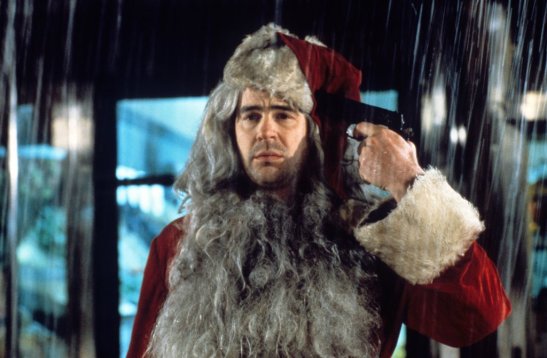 Being unable to appreciate what you are given in life is a common holiday conundrum.  The movie “Trading Places” showcases such a tribulation in a way only an 80’s movie can, without regard for being politically correct and employing the comedy skills of early-era SNL greats (namely, Dan Aykroyd and Eddie Murphy). I’m slightly embarrassed to mention (but not too embarrassed not to publish for the whole world to see) that I’m infatuated with the young Dan Aykroyd,  because he probably did lots of blow with John Belushi and never got in trouble for it.

In “Trading Places,” Aykroyd plays Louis Winthorpe, an upper-class commodities broker at Duke & Duke.  The two crotchety partners, Randolph and Mortimer, are at odds with each other – one thinks people are either born criminal low-lifes or not, and the other thinks even an upstanding financier such as Winthorpe would resort to a life of crime if he lost it all tomorrow. They wage a bet. They toss Winthorpe out on the street after framing him for petty theft, and a gregarious street hustler played by Eddie Murphy moves into Winthorpe’s penthouse and takes over his life.

Winthorpe winds up gaining the friendship of a prostitute (Jamie Lee Curtis), but does break into the Duke & Duke Christmas party totally drunk off his ass and weilding a gun. He sneaks in wearing a dirty Santa outfit and stuffs an entire salmon under his lapel, later devouring it on the subway to the horror of a female onlooker.

In the first Home Alone, Kevin McAllister (Macaulay Culkin) walks over to Santa’s cottage on his suburban Chicago-area block to ask for his family back. Santa’s cottage is closed, but Kevin spots Santa trying to start up his broken down car while smoking a cig. 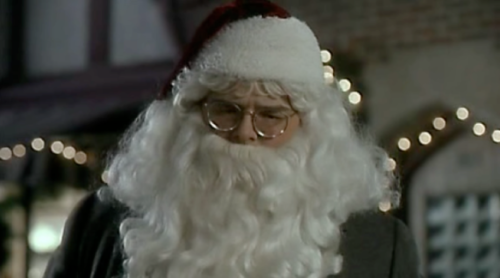 Santa doesn’t have any candy for Kevin because “his elf took all the candy canes home to her boyfriend,” but he does give Kevin a few orange Tic Tacs. Santa unfortunately discovers a parking ticket on his station wagon – “What’s next, rabie shots for the Easter bunny?” – and then Kevin heads home. The actor who played  Santa in this scene was Ken Hudson Campbell, who, according to his IMDB page, just starred as an Uber driver in a 2017 Christmas movie called The Trouble With Mistletoe.

I do have a thing for sad, chubby guys with glasses, so I think that back in 1990, this down-on-his-luck Chris Cringle and I might have made a nice pair.

This blog stands as a warning to those unafflicted by holiday woes – do not drink too much, or eat too much, or smoke too many cigars like a chimney this holiday season, because your mind will turn into a blizzard of weird thoughts that you won’t be able to see through, until the only topic you can think up for your Holiday Blog is about “Movie Santas you’d like to F**K.”

So… did I leave any of your favorite Santas off the list?

Reader Survey: WHAT DO YOU THINK OF MEN WHO CONSIDER “DIE HARD” A CHRISTMAS MOVIE? FACTORYGIRL1987@GMAIL.COM