When you are away at college, you are encapsulated in a bubble. It is a bubble in which the morally reprehensible is in fact, permissible. Being a “college student” can actually be a powerful excuse against the status quo, the law, and any semblance of normalcy.

I went to a small liberal-arts college surrounded by woods, and wineries. There was lots to do, and it all relied on music and alcohol. First, there was The Creek Scene. This involved me swooning over guys from philosophy class while they strummed guitars around a bonfire. It was also a good spot to consume hallucinogenic drugs on your birthday. There was the Main Street Bar Scene and The Basement Show scene. Both involved forgetting to wear pants, becoming rowdy on MD 20/20, and vomiting in a bush.

I was just a party girl, in a party world. Scoring free cake hungover at the bank. It was four years of reckoning, of learning, of encountering a vast multitude of experiences.

My best friend – absolute best fucking friend – was a Syracuse native named Tara. When I first met her, outside of the Williams Center on campus, she did an amazing impression of a mall walker. It almost made me pee my pants. I was really close; the closest I had ever been (that’s what she said).

We realized, the first day of freshman year,  that we lived in the same dorm, on the same floor. We decided to trade roommates. Tara had a German exchange roommate who cooked soup at 8 a.m., and my roommate listened to Evanescence. They both thought we were weird, and welcomed the switch. Tara and I were still roommates when we graduated, four years later.

Tara has invited me to go to Syracuse with her for the weekend. It’s the weekend of the Taste of Syracuse Festival. Our friend’s band, Thunderhips,  is slated to perform.

Her dad picks us up in his minivan, outside of Alumni Hall, to bring us back to Tara’s hometown. Tara hails from a farm-friendly town just outside Syracuse. I’ve never seen a cow up close, but Tara talks about cows regularly. This is so exciting.  I’m going to hang with actual cows.

Tara and I smoke pot in the back seat and eat a thawed-out frozen pizza that my mom gave me.

“Are you guys smoking dope back there?” Tara’s dad, Rick, asks.

“No – oooooooooohhh.” Tara rolls her eyes and takes a bite of cold pizza, pigtails bobbing to and fro.

The highway has opened up to verdant springtime cow pastures and fields. Horses prance around near grain silos. I stare off in the distance, feeling peaceful and rested.

“We used to skip class and pet cows over the fence of my high school,” Tara declares with watery eyes. “There is it!”

“Wow – high school!” I shout, looking at a brick building far away.

Hours turn into minutes, minutes into seconds, as we drive. We tell Rick to drop us off at the Carousel Mall. For a few hours, we waste time at H&M.

It’s early yet – not even noon. We make plans to meet up with Tara’s sister, Taryn, in downtown Syracuse.  The festival has begun.

It’s pouring rain by the time we arrive downtown.  The Metro bus drops us off at a foggy intersection. The rain is  ceaseless, and chilly. Cigarette smoke mixes with the aroma of fast food.  Grim, gray mist hangs in the festival crowd. We head to the tent where Thunderhips is due to perform.

We spot Taryn, 16, in the distance. She’s accompanied by Tara’s old  friend from the neighborhood,  Amanda. Amanda is eighteen, like us. The four of us stand around and chit-chat with classmates.

Twin sisters from school, who comprise their own band, are currently performing. They have a Michelle Branch-derived sound, and get all the attention from guys we know in bands. Not because of their music. Tara and I look at each other and roll our eyes. A skinny, blond guy is standing behind us, staring at us.

“Let’s get lunch,” we say simultaneously.

All the restaurants in the City of Syracuse have set up stands. We arrive at a seafood stand. I  select an unadorned Fresh Scallop Kabob. Suddenly, the same grimy, blond man creeps into our space.

“Hi, Shawn,” Tara says with a roll of her eyes. “Annie, you remember Shawn?”

Actually, I do remember Tara laughing about her ex-coworker, Shawn. Last summer, Tara worked at the neighborhood Subway. She told me that she had a creepy 30-something coworker, Shawn, who was basically a dud of a human.

Shawn opens his mouth but no words come out. There is an intense look in his beady eyes. Tara and I link arms and strut away, kabobs in hand. Taryn and Amanda trail alongside. Shawn follows far, far behind us, trailing us block after block.  The clock strikes 4 p.m – cocktail hour. Tara has read my mind, and finally acknowledges the uncomfortable presence known as Shawn.

“Shawn -” she shouts.  “Shawn, will you make yourself useful and get us  long island iced teas?”

Our stroll has brought us to the entrance of place called McMooney’s Tavern. A patio with umbrella-bedecked tables awaits us. McMooney’s is in the central town square. Across from McMooney’s front patio, there is a giant fountain and concrete pavilion. During our walk, the clouds have parted and the sun has emerged. It’s a pleasant 65 degrees.

Tara, Taryn, Amanda and myself plop ourselves down on concrete steps across from McMooney’s. Shawn disappears into the bar, to buy two Long Islands – one for Tara, one for me. I’m in some denim mini dress, precarious wedges, and a giant sweater. We make ourselves comfortable on the concrete steps near the fountain. A long time passes by. The fountain bubbles and foams. Where the fuck is Shawn and our drinks?

Tara and I look up from our conversation, and finally rest our eyes upon Shawn. He is brandishing two frosty Long Islands. He must have been gone a solid 25 minutes.

Shawn hands one glass to Tara, and the other to me. I take a refreshing sip of iced tea. A half hour ticks by as we all leisurely chat. We have ostracized Shawn. He is leaning against a wall across the street, far away and alone.  My long island is just about halfway gone when I realize, wow, I’m pretty drunk. I do something that I rarely do, which is set my drink aside.

Once I discard my drink, my level of drunkenness continues to increase. I feel  foggy, growing  increasingly hammered by the second.

My mouth feels like there was novacaine in my cocktail. Tara takes hold of my shoulders, looks me straight in the eye.

I slump to my right, stick my head in the bushes, and violently puke. So much vomit comes out – it’s an uncontrollable explosion. Was it the scallop kabob?

“I think I was poisoned.”

My speech has apparently become unrecognizable. All attempts at communication are  futile. This must be how the guy in Diving Bell & the Butterfly  felt.

Tara stands up and shouts at the top of her lungs from the concrete steps.

“ANNIE HAS BEEN ROOFIED!”

Sounds of clinking silverware and laughter drift to me from McMooney’s patio. Across the street, no one looks up from their meal. If they did, they would witness a tragi-comedy playing out. I put my hands firmly on either side of my body, as I lay on my side. My body is numb. I am anaesthetized. I lay on Tara’s lap like a helpless child. The world is spinning around me, becoming a haze of green and black. I puke into the bushes again and again. 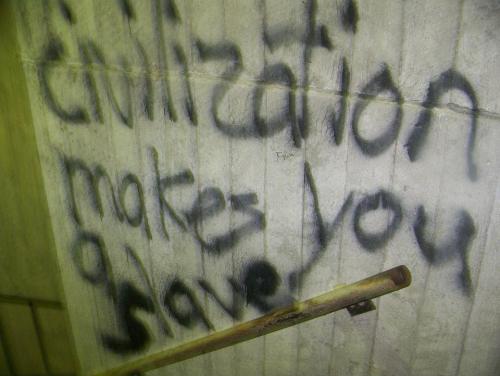 As soon as I throw up, I pass out. Totally unconscious. I open my eyes; dusk has fallen on downtown Syracuse.  Tara is petting my head as I rest on her lap.

“It’s going to be ok babygirl, hang in there. Hang in there boo boo!”

She jumps up, and runs to Amanda, telling her to get the car. I swear that I see Shawn creep up next to me and sit down. He starts murmuring in my ear about going to a hotel. My eyes have rolled back in my head. I lean over and throw up on his lap.

“She does not need to go to a hotel!” Tara is running towards Shawn. She punches him in the ear. “You roofied my friends,” Amanda shouts.  “You’re going to go to jail! We know where you live.”

“I only put stuff in one of the drinks!” Shawn says, running away.

Amanda and Tara each grab one of my arms, and hoist me up, completely dead weight. They half-carry, half-drag my limp body across the street. We pass a flower shop with a big glowing sunflower in the window. My vision is blurry; I’m seeing triple. They put me into the passenger seat of Amanda’s SUV. We go back to Tara’s house. I fall asleep in her little brother’s bed, and dream about choo-choo trains. In true melodramatic fashion, I’m certain I won’t live through the night.

The next morning, I’m choking down dry toast at the kitchen table. Tara and I are getting ready to go down to the Syracuse police station to report Shawn and the Roofie Incident.

We enter the massive, glass-enclosed police building with Rick.  A seven-foot tall, straight-faced cop stares from behind his front desk.

“Can I help you?” His mustache twitches.

“Yeah, it’s true,” I  say, embarrassed, looking at the ground. “It was this guy Shawn McMann. He lives in the subsidizing housing on Broadway and works at the Subway on McKinley.”

We go into excruciating detail about McMooney’s and the long island iced teas, the Taste of Syracuse and how my limp, lifeless body was carried away.

“But you see, sir, I only had half of one, and was definitely throwing up for hours…I bet the drugs are still in my system!”

“If we are to charge this Shawn with anything, we will also have to charge you with underage drinking,” the cop says.

Tara and I look at each other.

“What?” Tara shrieks, clutching her hair.

“You know what, I’m not from Syracuse,” I declare. “I’m from Buffalo. So I’m just never coming back to Syracuse again. I don’t feel safe. Thank you and goodbye!” We stomp out of the police station.