It’s Saturday night. Jaclyn, an acquaintance who I work with occasionally,  has invited me to a party. The party is being held at a well-known gay bar. Jaclyn has been dating the gay bar owner’s brother for quite a while. It’s the owner’s birthday. There is a celebration being held at his club.

I take this as an opportunity to encounter some new people, to immerse myself in a completely foreign scene. I’ve started to see the same faces, been ending up in the same places. I need  something new, something… unorthodox. An investigation into the gay nightclub underground seems apropos.

Around eleven, Jaclyn and her boyfriend Sal, the owner’s brother, pick me up from my apartment. We head downtown. The club’s neon sign glows radioactive pink. The bouncer welcomes us inside with a nod. We meet up with Jaclyn’s friend Kate and her boyfriend, Keith.

The four of us sit down in a booth area while Sal goes to get us a bottle of Absolut. There is a large open area around the bar – not many patrons have arrived yet. Another dance floor/stage area is in a curtained-off, adjacent room. The place is mostly black spray paint and concrete with hot pink accents. We are enclosed in a dark sitting area behind the bar.

A middle-aged transvestite woman descends upon our booth in kitten heels. She sits down across from us without speaking, looking at us. Five minutes pass, then she asks –

“So, what brings you guys here, a bachelorette?”

“No, just her boyfriend’s brother’s birthday,” I reply. We’re getting antsy for Absolut.

“Ooh, is it a party?” She asks, fiddling with her reflective clutch purse. She wanders away before we answer.

“Was she about to offer us drugs or something?” Jaclyn asks me.

Sal returns with the vodka, some mixers. We drink for a little bit until Sal suggests we take a walk down to the basement of the club. We head through a back door, down concrete steps covered in flecks of glitter. Once in the basement, there are racks of sequined costumes and props left over from the drag queen shows. Guy stand around smoking cigarettes. I stick a fake rose in my hair, from a drag queen of yore. Abandoned stage scenery is scattered about; speaking of which, one such performance is about to commence. I pop a Tic Tac and feel a revitalizing rush.

We head back upstairs to watch the show. It was advertised as an Underwear Competition. A drag queen is standing on stage, with a pretty decent crowd gathering around. The crowd is mostly young, very young, gay boys – this club allows 18 and up.  The Queen is speaking into a microphone, shimmying around in a fringed figure skating outfit. A young blond boy is staring up at her in awe.

“What do we have here, hmmm?” The Queen Bee is purring down at the blond boy, stroking his hair. “Is that because of me?” She is acknowledging the boy’s raging hard-on. I’m surprised at this, because I never thought drag queens were sexy, or even really trying to arouse people with their theatrics. I always thought it was just about an artistic performance.

The Queen calls up the two finalists of the Underwear Competition. We missed the early rounds, I guess.

“Our first finalist is the luscious, lascivious, Damian!”

“An the sumptuous, sexual, Stephen!” Stephen looks about 18 with a septum piercing and tattoos. He’s nervous and dripping in sweat. I wonder where his parents think he is.

A booty-poppin’ jam blasts out of a speaker. Damian and Stephen make their ass cheeks clap like strippers, directly in the faces of front-row spectators. They bend over, drop it low, twerk. We’re in the way back, and the crowd is getting riled up in a crushing horde.  I’m reminded of that French short story from 100 years ago about some strangers having sex at a public execution.

What’s the prize for this competition anyway? Young and doe-eyed boys wander around in various states of undress. Are they gigolos for hire? 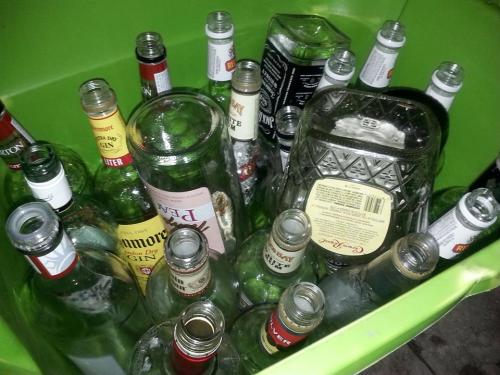 We walk back to our couch and bottle of vodka, amid applause for our young exhibitionists. A half hour or so passes. Then, we hear the DJ start his set. We make our way through the curtain, onto the dance floor. Jaclyn and Sal are dancing together. Katie and Keith are dancing together. This leaves me getting groovy by myself. Obviously, none of the men in this joint want anything to do with me. Should I have brought a date to this shit? I continue to dance alone in the middle of the room. Whatever. I’m not a total loser.

An overzealous black kid in short shorts bends over in front of me. I think he feels sorry for me. The feeling I’m experiencing is the loser at the school dance, and this guy must pity me. It’s kind of embarrassing. I swivel around – a gloomy looking brunette kid starts swinging me around. At first, all’s well and good. Then, he starts inching his way closer to my face. This boys smells like ass. Ass. It’s unbearable and nauseating.

I run away into the other room, hunch over the couch, gasping for fresh air. Inhale, man, inhale. What the fuck was up with that?

The drinking continues. Now, the night is not so young and my body is not so sober. I am swept up in my own thoughts.  A dark tunnel opens up in my mind and I follow it through, down down down into the foggy abyss.

A bespeckled guy sitting to my right starts talking to me. He comes off as kind of straight. Straight and alone at the gay bar. I tell him a little about what has brought me here, and I’m sure that he knows that I’ve never been here before, because I’m sure everyone else here is a regular. It just gives off that type of vibe.

He takes my phone from my hand, and puts in his name and phone number as “Master Jeremy Dollar$.”

“What’s up with your name?”

“It’s because I have coke,” Master Jeremy says. “About four grams.”  That makes sense – who else but a drug dealer would be straight and alone at a gay bar?

The two of us embark on a teeter tottering walking tour of the club. Master Jeremy bursts into the bathroom after I head inside what I thought was the girl’s bathroom. “The bathrooms are unisex,” Master Jeremy informs me. I suppose it wouldn’t make sense to separate guys and girls in a place like this, where the girls become guys and the guys become girls and the girls who are guys like the guys that are girls.

“Would you…watch me while I pee?” Master Jeremy asks. “That really turns me on.” He’s unveiled his arsenal of coke with the bathroom stall wide open. He is sputtering and coughing and sniffing like a broken snow blower. I stare at my own face in the mirror, but can’t really see anything. I’m chain smoking Marb Red 100’s and foaming at the mouth. It’s after four in the morning.

“Yeah, babes, I’ll drive you home,” Master Jeremy says. “You are beautiful, you have a perfectly-symmetrical face, and great eyebrows.”

“Hmmm…thanks.” I wander back out into the bar, and quickly spot Sal and Jaclyn on the same couch we were on earlier. Katie and Keith left long ago. We head out into the crisp air of dawn, and I am ushered into the backseat to be taken home at long last. What a night.

I look out the window, directly next to me to my right. Master Jeremy Dollar$ has his face down at eye level, looking into the car, at me.

“Ahhh!” I shriek. “This is some Twlight Zone, creature-on-the-wing of the plane shit! Peel away!”

Sal accelerates; the tires screech. We are off, speeding away from the notorious club, from Master Jeremy Dollar$, from the smell of ass.

Any resemblance to an actual gay bar that really exists is purely coincidental.