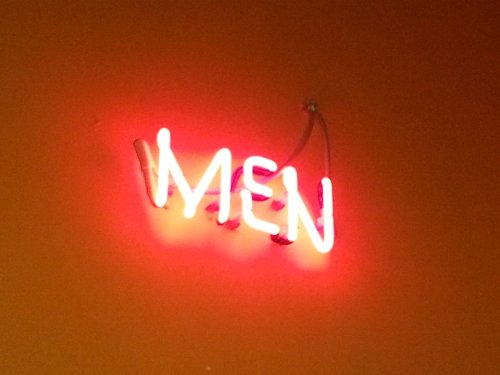 I’ve taken a new number at the meat market of life. The edges of my soul have hardened, like cheese left in the sun. With that salty taste always deep in my throat, I’m forever thirsting for more.

That’s what I should have expected, after going out with someone I met at The Bend.

When I came back from Austin, I met some guy at the place formerly known as The Bend. It’s now called “The Exchange.” Honestly, we only went in there to see if it still carried the same seedy ambiance.  Sure enough, my friend Maurice and I found ourselves seated besides two guys in their early thirties. Something in the air between us whispered “I’ve got issues.”

It was early evening – cocktail hour. We’d gone to some old crusty hippie gathering at Nietzsche’s, featuring a crock pot of slop. I met DBGB’s handsome new bartender. Ladies, he has a man bun. Maurice and I were topping off my homecoming with the rest of The Exchange’s wine when I began a questionable flirtation with one of the weirdos there. He had narrow droopy eyes and muscles, which I never really care for. Honestly, I prefer hairy torsos and bellies that double as a comfy pillow when I drink too much. His stance seemed apropos for hanging at Bottom’s Up. His friend’s glasses were clear plastic frames with tinted lenses, which might insinuate he sells coke. But despite all these oddities and incongruities, we exchanged phone numbers, because well, I haven’t written a blog in a while.

Sure enough, my date with Justin proved to be very bloggable indeed.

Go figure, Justin’s house is near mine. We meet up at the neighborhood tavern. I’m not super aroused by the sight of Justin, and literally exhale a poignant sigh of despair while getting ready. I just need some writing material. A writer’s life is filled with sacrifice.

Justin’s puffing on a cigarette like it’s 2006 when I drag my lazy ass feet to the door. We sit at a lopsided table with a bucket of ale. Justin’s all about the baseball game on the TV – and is that a tribal tattoo peeking from under his tee shirt? I begin drinking. Justin’s got a serious look on his face. Sure enough, he begins an elaborate story.

“Century Grill never gives me many hours bartending,” he begins. “I used to work way more at Templeton Landing, but after the summer they always get rid of people. So I’m kind of strapped for cash.”

“You just need a side hustle,” I reply. “I’m going to make candles!”

“Well, I used to be a dancer,” Justin continues. “My friend Mike and I, we were strippers. His name’s Mike so we called it Magic Mike’s, showed the movie, and after did our dance performance. We sold tickets and had it at this hotel in Corfu, and later ended up doing a bunch of bachelorette parties.”

“My girlfriend at the time, she didn’t care for it. She was a lawyer and 10 years older than me. She bought me this Cadillac and I was making payments on it and everything, but when she broke up with me she took away the car and now I don’t have one. I had saved up $10,000 but I wasn’t working so that went pretty fast. So I have a rental car, which is expensive.”

“I have credit issues, financial issues. My dad, he’s paralyzed after an accident. I have to go up to the Adirondacks and see him. It’s stressful and hard, but I’m dealing with it.”

“And also, my other ex girlfriend, I asked her to move in with me, because after a month of seeing her I realized she was living in a grimy basement on the Lower West Side and I felt bad. So she moved in, and one day she got all dolled up for a ‘job interview’ at nighttime, and didn’t return for six hours. She was all glassy eyed when she came back, and turns out she sold her phone for heroin. I forgave her, and a few weeks later she disappeared again and I never saw her since.”

I feel like Justin just dropped a whole JFK terminal of baggage on my shoulders. So me being a pretty empathetic person, I agree to accompany him to Hardware for his “friend’s birthday celebration.” It’s Monday after all –  it should be a chill, drama-free evening…

I’m texting with my mom while Justin’s outside smoking. She’s asking me all about Justin’s last name, which I’m going to find out asap, since the last guy I met in Allentown turned out to have been in prison for holding his girlfriend hostage at gunpoint.

Justin suddenly shows up and starts reading over my shoulder.

“Oh yeah, sorry, my mom, she just likes to find out who I go out with and stuff.”

The shards of strength it’s taken to maintain my stoic expression disappear. My mouth slackens; my eyes become a blank stare.

“No, I know, I just told her the other day when I first met you, I must’ve said Justin.”

Jason rolls his eyes but buys me another drink so it seems he’s gotten over the error.

Jason is driving me home in the  rental car. I rejoice in the night finally coming to its conclusion. He lives in the hood, not gonna lie, but I agree to check out Jason’s paintings. They’re landscapes and actually pretty good, if the photos of them on his iPhone are any indication. Besides, Jason’s friend, the one with the glasses, has given him some “epic pot” that he says I can try.

We enter Jason’s clean, well-lit dwelling off Genesee. Sure enough, his landscapes glow from the walls in blue and green hues.

“Wow, neato! Loving the colors. They make me happy!”

Jason’s dug out the marijuana, a couple hundred dollars worth in a large Ziploc – quite a bit for someone who by their own admission “rarely smokes.” We sit on the couch. I’m moderately buzzed, not in a bad way, and when Jason begins making out with me I go with it for five minutes or so. A make out session never killed anybody.

I turn away and start puffing away on the weed. When I look back at Jason, he has removed all of his clothes. He stands up and moves toward  me in true male stripper fashion.

“No, wait -” I say. Overwhelmed, I burst into tears. “I don’t want to do anything,” I choke out between sobs.

Jason looks confused and sad, then his expression shifts to annoyance.

“Are you on something?”

“Do you have issues, were you raped as a child?”

“Are you worried I’ll never speak to you again?”

I continue bawling and dry my face on a couch pillow.

“I don’t want to sleep with you. You look like my cousin.”

The cousin thing – which hit me about halfway through the night, a cousin I don’t really like on my mom’s side – pisses Jason right off. He starts pacing around, still naked.

“Your cousin? That’s the most goddamn stupid thing I’ve ever heard.”

“Just take me home!” I shriek, cry some more.

Jason drops me off down the street from my house. I run across the muddy lawn, breathing a sigh of sweet surrender at being home.

Update: One week later, I was in Rafferty’s (the local tavern that Jason and I went to) with Maurice. A random biker approached us and told me, “The guy you were here with last week is a convicted sex offender.” He found his profile  for me on the U.S. Dept. of Justice Sex Offender Web site. Sure enough, it was really Jason. He date-raped a 19 year old ten years back, when he was 22.