I have a silver-haired suitor named Mick. He’s a fortysomething banker who proudly goes commando.

As Sunday morning turns into afternoon, light fog permeates the air. A misty gray sky hangs above downtown. It’s calm after last night’s drinking crowd. Mick is driving me around in his ‘01 Beamer, six-foot-two frame squished behind the wheel. He stickshifts around the Harbor Center, taking a meandering route to nowhere in particular.

We check out construction on the new ice rink, killing time before an afternoon Christmas party. This mysterious soiree – hosted by a priest – will contain local politicians. Or so I’m told by Mick. My hunger for adventure made me accept his invitation, which came along at just the right time. I’m going through a Jon Stewart phase.

“Thanks for the wine,” I say. Beringer Estates white zinfandel sits in a little wicker basket.

“I need that basket back though,” Mick says. He lets out a chuckle, peering at me sideways with crystal blue eyes.

This is the first time I’ve gone anywhere with Mick. I definitely didn’t expect a gift. We relax at the Main and Chippewa intersection. All is still. The street, vacant. As the light changes from red to green, Mick shifts the car into gear.

Instead of moving, the turn-of-the-century BMW just absently rolls forward and stalls out.

“There’s something wrong with my car,” Mick says, turning off the ignition and turning it back on again. The car does the exact same thing – nothing.

“This has never happened before,” he says. “Oh my God why is this happening?”

“Maybe you should take the keys out and let it rest,” I say, putting my hand on his thigh.

Mick steers the car towards a parking lot 30 feet away. A random pedestrian in prison orange appears out of nowhere, and helps him push. I feel like Cleopatra being carried by two male attendants. We make it to the parking lot and I get out of the car.

I’m shocked Mick doesn’t toss him a couple bucks, but then again, I don’t either.

“Whenever someone’s car dies, there’s always that random helper nearby, and they always ask for money. It’s a known hustle,” I say.

“That was the same guy?! I was too shaken up to notice.”

We are in a parking lot right by The Lodge. We go there to figure shit out. I left my car on Elmwood and Auburn. The party is around Nottingham Terrace/Parkside, at Father John’s crib.

We take a seat at the bar.

“Look, I have AAA,” I say. Mick orders a martini, straight up. He’s visibly frazzled.

“It’s going to be ok,” I reassure. “The party doesn’t start for like, two hours.”

The two of us hang out for a while, eventually abandoning the car. AAA would only tow it five miles with the policy I have, and what good would that do? We take a taxi to my car and head to the party. 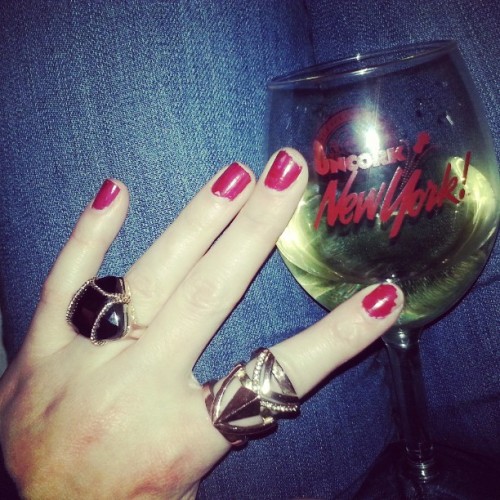 At the party, the cozy kitchen is stuffed with middle-aged couples. A long table is lavishly spread with various canapes and hors d’oeuvres. The host, Father John, emerges from the crowd in a nubby Christmas tree sweater.

Mick introduces me to Father John, who extends a polite handshake. The two of us head to the open bar. A couple older bartenders are mixing drinks in Father John’s cleared-out living room.

Mick and I stand against the wall, close together.

“Father John is in love with me,” Mick says.

“Oh come on,” I say, “In love?” I look over my shoulder. Father John is staring at us from across the room, with a twinkle in his eye.

Guests gradually fill up the kitchen, living and dining rooms. A state Senator who I spot around town all the time shows up. Mick points out another Senator rocking a hideous royal blue fleece in the kitchen. I force my tipsy self to not ask him questions about his latest controversy. They aren’t as attractive as Mick, anyway, and not just because they’re both Republican.

Mick and I make a few more trips to the bar. The martinis and wine are flowing. A carving station opens up, offering turkey and succulent roast beef sandwiches.

After we chow down, I lead Mick down a random carpeted hallway. We find an empty den with bowls of chips everywhere.

“You are gorgeous and young,” Mick says. “Everyone here is looking at you.”

“No they’re not. I haven’t noticed, anyway.”

We sit down on the futon.

“How could you not have noticed?”

I want to make out with Mick badly, but go figure – the damn door is clear glass. Not exactly the privacy I had in mind. Suddenly, a goofy-looking short guy with a crooked tie enters the room. He slumps in an armchair with a beer.

Mick and I look at each other.

Jack starts carrying on about his public speaking job with the county.

“Oh you know, I give tours. Looking to retire soon. It’s been very rewarding….”

He carries on and on and neither Mick nor I say much in response. I’m waiting for this Jack creature to vamoose but then…a fiftysomething woman in one inch heels and candy cane socks comes in!

“Oh, this is my wife,” Jack says, rolling his eyes. Jack’s wife sits on the other side of the room. She looks tired and bored. Jack keeps talking about his job while his wife just sits there looking miserable.

After 25 minutes or so, Jack and his wife leave. Mick and I emerge, going back into the soiree. Father John rushes towards us.

“Oh, Mick, so good seeing you. Merry Christmas.”
We go off into the night, stopping to make out in the Historical Society parking lot.

Later, I fall asleep while reading a text from Mick.

“See – listen to this. I told you Father John has a crush on me. He sent me an email saying he wishes I slept over and that he loves me! And that asshole Jack. I should have told him to give us some fucking privacy! They are so fucking nosy! And then his wife walks in. I should have told them to go away. You are beautiful and amazing. Let’s go to Rick’s on Main next weekend. Good night.”