Splitting the Bill in a Post-Feminist World

First dates are like fire drills – sometimes they are real, but most of the time they are false alarms, but we are still lucky to get out of them alive. I’m moving up from not introducing my boyfriends to my parents to completely not telling anyone I’m going on a date at all. I don’t even tell my mom when I’m going on a first date. If I did, she would likely ask, “How did it go?” And I don’t always want to recount whatever sick, twisted ordeal I’ve been through this time.

I’m not choosing men based on how “wild” or, God forbid, “crazy” they are. I did that when I was 19 years old. But just the other day, I had a date within the confines of my old, eerily-small college town. It was a revisitation to my 19-year-old stomping grounds, so perhaps the craziness which ensued should come as no surprise.

The “datee” in question was a man whose age I didn’t really know.  He used to teach entry-level photography at school and take pictures at shows. If I remember correctly, I think he had been “hanging out” with one of my suitemates. Who knows, who cares. I’m older now, wiser now, and something was telling me this chap and I might get along. I did what any Millennial, post-collegiate gal would do. We chatted on social media. That Saturday, I drove down to the infamous town. The plan was to go to the Salvation Army then eat at DeJohn’s – an Italian joint with $1.99 margaritas. 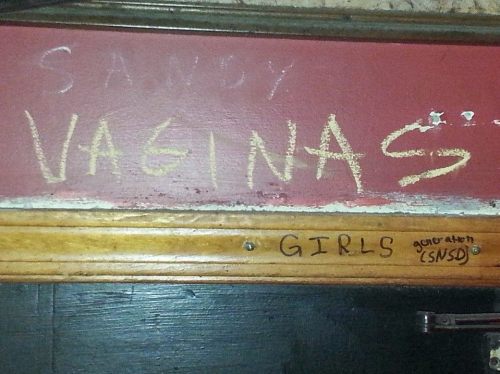 The first thing I notice about “Juan” is his spotlessly-clean apartment. It is very clean, and VERY quiet in there. (Eerily enough, one of my college frenemies lived in the exact same apartment).  Juan is an artist. He has paintings, photographs, and illustrated skateboard decks on the walls. All of his tee shirts are hanging in the closet, color organized, along with a shelf of thousands of CDs, alphabetized. I spot a lovingly-framed photo of Juan and his parents, just the three of them. There’s a desk with a landline phone. Juan picks up the receiver, dials a number, and says “Dad, my friend is here and we are going out, so I won’t be home the rest of the day.”

We set off for Salvation in Juan’s car.  He is a quiet man with the body of a telephone pole. The shy, hyper-organized nerd hasn’t yet, up until this point, been on my dating repertoire – but I love trying new things. Juan buys a green tee shirt that says “Camp MooShu” and a belt (he is really skinny, and practical too, I guess – you have to keep those pants from falling down somehow).  I buy some practically impractical clip-on earrings left over from a wedding in 1988. 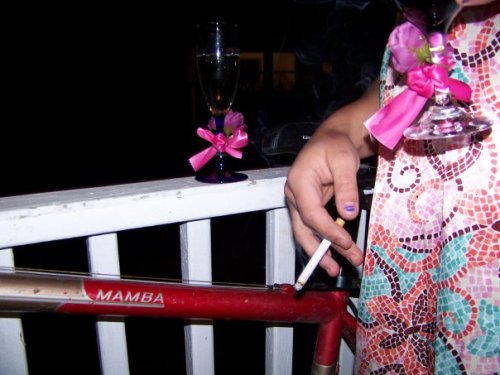 After the shopping trip, we stroll through town. I’m growing nostalgic with these familiar streets and the old “Party Houses”: 25 Central, 7 Forest, 140 Temple, etc. It’s bringing me back – way back.

BJ’s, where do I begin? BJ’s feels like being inside of a Dinosaur Jr. album on infinite replay. It’s a place where you can get blackout drunk with laundry quarters. It’s a music venue with plenty of shows, where my friends’ bands always played. It’s the top spot for every artsy person in town, at a college where “artsy” people are the A-list and the miniscule“bro” and/or “jock” population gets ostracized to shitty bars on Water St.

We go to DeJohn’s first. I’m hungry. We are the only ones in the restaurant. A mid-30s guy with glasses and a shaved head shows us to a booth. The booth is red vinyl and has string lights around it, plus there’s “Gilligan’s Island” playing from a television right on the table. He hands us menus and a remote.

“Can I get you some drinks?” the waiter says.

“Yes, I’ll have a margarita on the rocks with salt,” I say.

Our waiter leaves so Juan and I peruse the menu. Juan decides on lasagna and I order the chicken parm. We begin a pleasant conversation about this and that. Juan is very hard to read.

“Do you have anything else to, like, do today?” I say.

“What else do you do around here?” I say. “It seems like it could get lonely.”

“Do you have Netflix?”

We finish eating and our waiter drops off the check.  It sits there, upside down, collecting dust almost, so I poke at it. Juan hasn’t noticed. I pick up the damn check and it’s $37.00. Juan doesn’t say anything.

Juan pulls a few 20’s out of his pocket and puts one of them with the check.

“I’ll give this to him and you can keep the change,” he says, leaving.

After a minute, Juan comes back. He hands me $3. I look at him somewhat oddly, but not obnoxiously so. “Gilligan’s Island” was the only “old school” thing about this meal, I guess. Juan leaves the tip, we exit DeJohn’s, and go across the street to BJ’s. 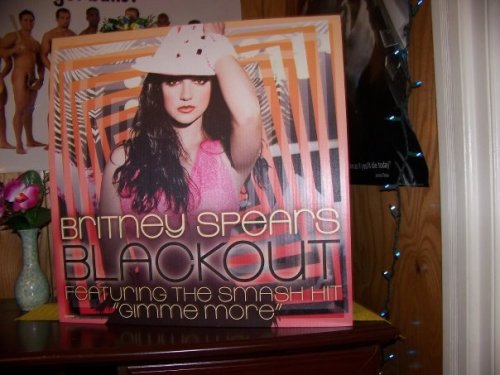 The two of us are alone in the bar, save for a long-haired bearded dude sipping a pint. Our bartender comes – a college girl in a knit hat. Juan orders another fucking “Blue”. I go with vodka, pay for my own shit, again, and give the bartender a look that says “keep them coming.” The sky has darkened significantly.

Just then, tons of young, really hot and athletically-built guys start filtering into BJ’s. They are accompanied by older men – their dads presumably – who all fall into the Silver Fox and D.I.L.F. category.

“The hockey team is here,” the bartender says. “There was a tournament today.”

In no time at all, BJ’s is packed full of the hockey team, their dads, and a few moms, too.

“We need to go to the strip club after this,” I say to Juan. “I’m going to invite the hockey team, and the dads too!”

“I just thought, when in Rome,” I say. “Are you uncomfortable with nudity?”

“Yeah, sure, play it by ear,” Juan says, with some trepidation.

Maybe I was misguided into thinking this was, indeed, a date. It could’ve been a date, but it ain’t. Not anymore. At least the hockey team is here. I turn to the hot dad next to me wearing a cashmere sweater.

“We’re going to the strip club after this,” I say. “If you all want to come.”

“There’s one of those around here?” he says, drinking a tumbler of vodka. “I had no idea. Ha ha.”

I look around BJs, at the black wall festooned with lewd scribbles, and the collection of rock band paraphernalia behind the bar. It is the same as it was so many years ago. My ”date” with Juan turned out to be a marvelous flop. Sure, I’m a spoiled bitch when it comes to going out to dinner. It’s too late to change that. Who would I be if I make out with a guy who won’t pay for dinner? Not myself, that’s who.

This story ends with me kissing a stripper at the nudie bar instead of Juan. Will Juan ever find love? Who knows. Who cares. But it’s not going to be with me.